I have a confession to make.

Give me a minute to compose myself.

Due to work requirements I recently found myself in the position of having to load Windows onto one of my home machines. It’s been 7 years since I escaped the driver incessant, pop-up window collage that was XP, and hopes weren’t high when the first two attempts to install it ended in failure. Like a dark cloud floating in front of the sun the ominous feeling of doom that had followed me for so much of my early computer life returned.

Weary of spirit, but stout of resolve I soldiered on and eventually, via the kindness of a friend and the privileged position of being a tech journalist once more, I installed Windows 7 Home Premium and braced myself for impact. 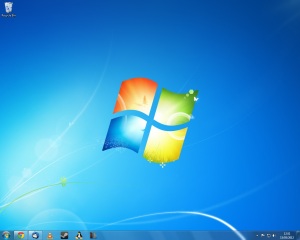 Where were the demands for answers that Microsoft previously made on me every time I wanted to accomplish even the simplest tasks? What’s this Dock-like area at the bottom of the screen where I can helpfully pin my favourite apps? Could it be true that the paperclip of interminable cheeriness had  finally been put down?

This indeed was a different country.

The visuals were smart, but tasteful. The system was snappy and efficient. Even the built in security features seemed unobtrusive. What sorcery was this?

Briefly the amazement held, then I tried to play a DVD. Ah, there they are. Error messages aplenty. DRM, drivers, codex, all those old birds coming home to roost. Several downloads, updates, and restarts later left me no better off. My short lived euphoria was shattered. Windows, you cruel temptress.

But before I could safely consign Microsoft to the backwaters of my mind a thought occurred. In the past year I have dabbled heavily in Linux. If nothing else it’s taught me that open source software can often fix the ills of the technological world. And so it proved. After ditching Windows Media Player in favour of VLC the DVD played first time. Then I downloaded Chrome, giving me access to all the apps I tend to use now (Google Docs, Tweetdeck, Google+, etc.) and installed Thunderbird for my emails.

It all worked brilliantly, and behaved in many ways like my Mac and Linux machines had. In addition I now had access to Steam, with it’s plethora of cheap games, and was able to complete the work tasks that began the process in the first place. All within an environment that I actually found pleasurable to use.

So, Windows…we’re friends again. Which is nice, as I don’t like to harbor grudges or miss out on cheaper hardware.

As I considered this strange turn of events it had made me realise that since I moved from PC to Mac I’d pretty much thought that was the end of it. But thanks to open source software the world is available to me again.  Now I can do anything I need on almost any platform. Could it be that I’ve become OS neutral?

I can choose whichever machine serves my purposes and budget without the need to conform to the tribe to whom I’ve swore my allegiance. Surely these are the dreams of fools and madmen? But no…

I never thought that I’d make a profound discovery while musing on the Windows OS, but it seems that fate is tricksy and not devoid of a sense of irony.

The digital landscape is wider for me today, and I like what lays ahead. It’s…liberating.

Just as technology should be.

How do you use computers today? Are you dedicated to one platform or do you wander like a harlot? Let me know by leaving a comment below.