When Apple recently announced its imaginatively titled Apple Watch, many commentators said that this now validated the emerging technology. Certainly the fruit giant has been successful in opening up new types of device by taking existing ideas and making them much more comfortable to use. The iPad for example was the first truly user friendly tablet, but it was by no means the originator of the idea – Microsoft had its own tablet PC back in 2002.

With the Watch though it feels more of a risk. For a start it needs an iPhone to work, and if you have an expensive device already in your pocket do you really need another overpriced remote control on your wrist? Also, how functional will it be with only a small screen to work with?

It will be a little while yet before we can see how Apple has addressed these challenges, as the device is not due to be released until next year, but if we skip over to the Android camp there are a few examples already loose in the wild.

The Samsung Gear 2 Neo is one such device, and with an RRP of £169 it should be around half the cost of the impending Apple version. In a sadly similar fashion though you’ll need a Samsung mobile device to make it work. I can understand the principle of tailoring a proprietary system so that it melds seamlessly with its siblings, but this just continues the customer lock-in that music and app stores already promote. That being said, Samsung do sell an awfully large amount of phones, so chances are if you’re considering this device you may well already be in that eco-system.

The watch comes in a rather fetching orange livery (although more sedate options are available), feeling lightweight and comfortable when worn. I don’t have especially large wrists, and never thought of the watch as cumbersome, but this is primarily a man’s watch, and as such it would look slightly ridiculous on the slim wrists of gentle ladies. The screen is bright and clear, retaining just enough contrast to be read in direct sunlight, and automatically turns itself off when you stop interacting with it. This is excellent from a battery conservation point of view, but did mean that when you quickly raised your arm to check the time there was a slight delay as the watch sensed the movement and then turned the screen back on. Not a huge problem, more an idiosyncrasy of the new platform.

Setting up the device is very simple. Download the Samsung Gear app on your phone, turn on the watch, pair the two of them together via Bluetooth, and you’re pretty much done. Then you’re free to explore the various features presented on the tiny 1.6″ screen. Navigating around is actually very easy. You swipe left and right to move through the various home screens, tap on an icon to launch an app, then swipe down from the top to go back a step. It might sound fiddly, but after a couple of minutes it makes complete sense, which is a good thing. If you do manage to get lost then there is always the physical button under the screen which takes you back to the home page. 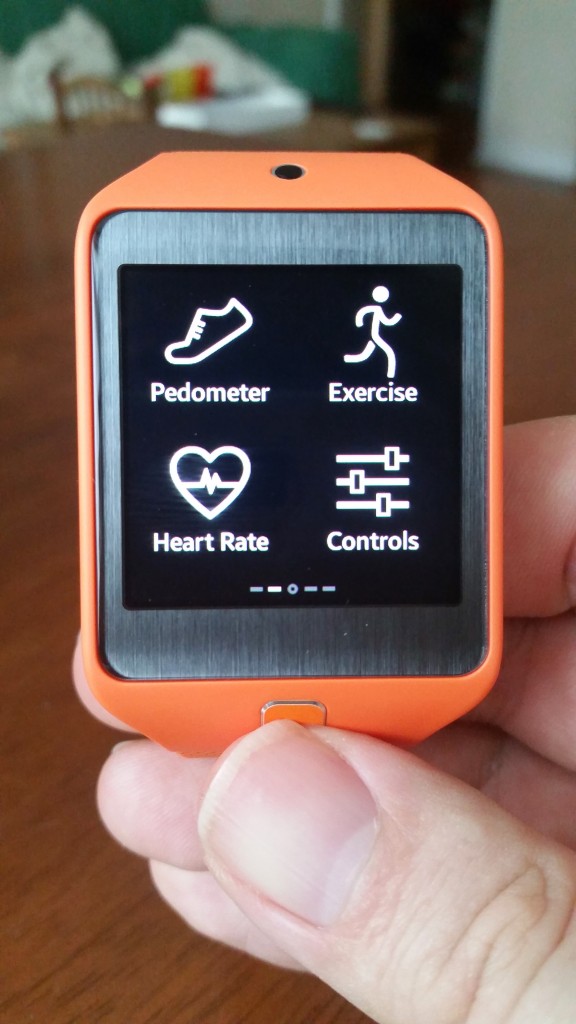 Of course for a smartwatch to be smart it needs to do something other than tell the time. The Gear 2 Neo manages this via several built in apps. There is a suite of health related apps, although they really amount to multiple pedometers optimised for different activities such as running, cycling and walking. A heart rate monitor is quite a fun addition, and the ability to link the Neo Gear 2 to fitness tracking apps such as Samsung’s own S-Health, and the likes of Edomondo expand the possibilities.

Communications options are also good, with the watch able to display text messages, emails, and show you who is calling your phone. In fact, thanks to the built in speaker and microphone you can ever answer the call and hold the conversation without your handset ever emerging from your pocket. This is handy for thing like cooking or driving, but if you’re on the bus then you might want to think twice before being that guy.

One, rather huge, caveat on the communications front is that you need to use Samsung’s own apps if you want to receive and respond to text and email. This is pretty poor, as one of the best things about Android is that you can replace stock apps with ones you prefer. So the Gmail app can’t be running on your phone (unless you want two notifications for every email) and if you prefer Google Hangouts or Textra for your SMS, that will have to go too. Presumably the reason for this is that the Gear 2 Neo isn’t actually running on Android, but instead Samsung has used its own version of Tizen for the OS. No doubt there are advantages on the programming side, but certainly not on the users’.

Apps choices aside, I have to say that having notifications on your wrist, ones that you can respond to with voice commands, is actually incredibly useful. If you suffer from phantom vibrations that cause you to constantly pull your handset out to see who sent you a message, only to be faced with disappointment, then being able to quickly flick your wrist instead is a wonderfully simple solution. Calls are also harder to miss, and there is nothing quite like seeing a text come in, tapping your wrist and voicing a response, then carrying on with your day. It’s a very James Bond moment. Voice searching is also cool, albeit slightly frustrating on the Gear 2 Neo, as Samsung’s default engine seemed to struggle to return results consistently.

There are a few other issues too; functions are limited by the small screen size, so reading anything longer than a very brief email isn’t much fun, many of the options to change settings are still on the handset rather than the watch, and you do have to add something else to your daily charging routine.

Wearable technology is certainly being promoted as the next big thing, and with the largest technology companies in the world all jockeying for position, this seems to be an inevitable truth. Whether they are quite ready for prime time yet is still debatable. For £170 you could buy plenty of useful things, or indeed a very nice watch. Then there’s the usual caution of never hurling yourself on the hand grenade of first generation products. With all that in mind, it’s not easy to recommend the Gear 2 Neo unless you already have a newer Samsung phone, and are willing to surrender yourself to the default Samsung apps. If you fit that criteria though, and have the money, then it must be said that you would no doubt get a lot of pleasure using a device that makes each day feel a little closer to being on Star Trek.

I was quite sceptical about the first-world nature of wearables. Now…I think I’m convinced. Better start another savings jar. Man, the future is going to be expensive.

1 thought on “Are Smartwatches any good? The Samsung Gear 2 Neo makes its case.”