In the wake of Edward Snowden’s revelations about the NSA and GCHQ surveillance activities, there has been a slew of books looking at how power is corruptly used to control the internet and the general populace. While many of these are certainly interesting reads (see my review of Data Vs Goliath for the impact on personal privacy for example) it’s not often that you get to see the other side of the coin represented in a non-sensational way.

The Internet Police comes as a palette cleanser then, with its focus on how policing has evolved online and why this is a positive force protecting people against the various neredowells and scams that pervade the digital world. 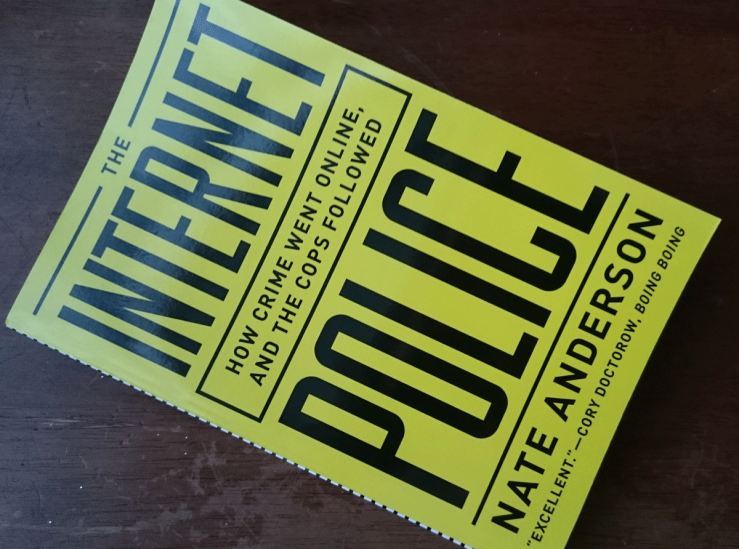 The law has, for the most part, always been reactive. Of course there are general societal norms which everyone expects to be maintained – don’t steal, murder, that sort of thing – but it often takes new approaches towards crime to cause laws to come into force. Essentially, if people don’t know it’s a problem then they’re not going to protect people from it. With The Internet Police Nate Anderson, deputy editor at the excellent Ars Technica, recounts the seminal cases of internet-based crime, and how this has brought about new legislation and police practice.

UK readers should know up front that the majority of the book focusses on US based policing, but that doesn’t detract from what is a very informative read. Actually, the book begins off the coast of the UK with HavenCo, a secure data centre built into the old legs of a North Sea naval fort. The reason for this less than sumptuous location was so that the company could declare the fort a sovereign principality,  primarily to avoid prosecution for hosting shady sites. As you can imagine, this didn’t end well, but it is a good example of how modern policing has to contend with some very strange interpretations of legal statutes, and work around them to ensure that the law is upheld.

Throughout the following chapters we’re exposed to the dark and disturbing world of child pornography rings, webcam hijackers,  fake pharmaceutical companies preying on men with low genital esteem, the origins of Spam mail, and a wealth of other people who thought they could hide behind their perceived anonymity online.

Anderson follows several cases closely, revealing how police first became aware of the crimes taking place, then the methods they needed to use to combat them. It’s not exactly as gripping as a detective novel, but does give an insight into how leads are followed up, legislation is created, and in some cases, how the bad guys still get away.

If the ongoing storm of distrust about governments and surveillance agencies is getting to be too negative for you, or you’re just interested in how the police force works online in the best interests of everyday people, then this book will maybe go some way to restoring your faith in the system.