I know. It’s not like me…and yet still it happens.

My old laptop is now tottering towards digital senility, and I’m left with the quandary of what to replace it with? My needs are reasonably mild – writing, blogging, research, a bit of audio production here, a dab of video creation there – nothing that requires a powerhouse machine. Even if I did need some extra grunt  then my Mac Mini is more than up for most tasks. So the question that echoes around the empty caverns of my mind with alarming regularity is ‘Can I use my iPad as a laptop replacement?’

Over the next month or so I’m going to find out.

Before I write that piece I need to get a few things in place and add a few accessories into the mix. I already have a wireless Apple keyboard which I use with the aforementioned Mac Mini. The onscreen iPad keyboard is actually very good, but using it for any extended writing sessions always gives me a crick in my neck, so an external one seems like a good option.

My iPad already has a case, which can double as a stand, but I find that it sits a little low and ushers forth the crick once more. So I need something that will keep the device portable, while elevating the screen and preventing it from toppling forward into my coffee cup. What’s that? A stand, you say? What a splendid idea!

The Griffin A-Frame is such a contraption.

When you first pick up the stand you can tell from the gentle heft that it is built to last. The aluminium construction feels sturdy and solid, two qualities that I usually hope for when I entrust the safe-keeping of a £500 piece of glass to something’s care. The central piece of the stand swings back to a set distance which offers a good viewing angle for an iPad in portrait mode, but I have to say that the angle is a little shallow when you change to landscape.

Griffin know that Apple have a penchant for elegantly styled and easily scratched devices, so the contact points on the stand are all covered in soft rubber to avoid damage and safeguard the resale value of its prospective passengers.

One of the real advantages that the A-Frame has over many of its rivals is the large chin that compromises the base of the unit. This means that the iPad sits about an inch or two above the desk, which is closer to a normal laptop than many of the traditionally low-slung tablet stands I’ve used. Crick…be gone.

In use the A-Frame is just about perfect. The iPad doesn’t wobble or exhibit any lemming-like tendencies while on the stand, and there is even a cutout on the back of the A-Frame which allows you to feed through a power cable neatly – although this only really works in portrait mode. The wide base is also open enough to hold an iPad in a case, which further maintains the safety of the device.

In truth it’s a little heavy, not stupidly so, and it’s only to be expected due to the solidity of the product, but when added to the Apple keyboard it does mean that the overall weight becomes similar to a normal laptop. Albeit a laptop that can be taken apart without the need for torx screwdrivers and heatguns. Now there’s an idea, Apple!

I managed to find a solution to the landscape viewing angle problem in the end by simply placing the case that usually holds my iPad under the stand. Hey presto, it’s a mini laptop. 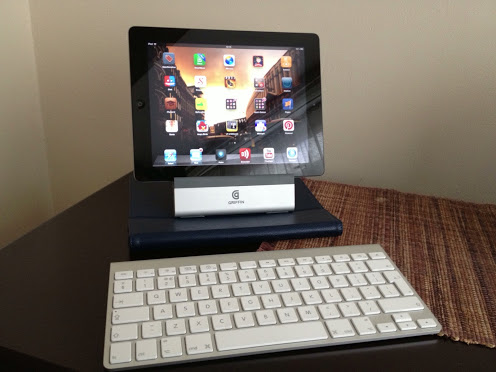 Of course the question will be asked ‘Why not just use an actual laptop?’

Well, I know that I’ll always have a tablet from now on. They just suit my lifestyle very nicely. If I’m going to have one anyway then it makes sense to try and adapt the device into my workflow. If it can carry the weight then I’ve saved about £1000 on a new MacBook Pro. Packing a few extra items in my bag to make this happen feels like a fair trade, and of course once I finish work I can put the keyboard away, prop the iPad on the stand and waste the evening watching Youtube.

The Griffin A-Frame retails for around £20 online. It’s a very useful bit of kit, and doubles as a handy desk stand on which to charge the iPad or use it as a second screen when working on your main machine at home. Simple, sturdy, and affordable. That’s all the boxes ticked for me.

Ultrabooks. What are they exactly?

As far as I can make out the initial intention of Intel when they coined the phrase was that ultrabooks should be lightweight, powerful laptops at the premium end of the market. Ultralight even. Hence the name.

Another way of saying this would be – they should be PCs that look like Macbook Airs. Yep, that’s pretty much it.

Strange then that since their formal introduction the term has been used in rather ‘inventive’ ways by manufacturers. Some of the models that parade under the banner of ultrabook are heavy, cheap, and rubbish. In fact what they should be called are ‘laptops’, bad ones at that. Now there’s a novel idea.

A more honest form of Ultrabook though is a different proposition. The allure of a machine that can do serious work, while not giving the bearer a hernia in the process, is a sensible one which I wholly endorse. I don’t really travel as such, but do have quite pansy shoulders which buckle under any substantial, or if I’m honest non-substantial, weight. So a laptop that floats on a cushion of ibuprofen is my ultimate machine fantasy (not including the whole cyborg/Natalie Portman/Xbox thing), but in the meantime I’ll take whatever help I can get. Thankfully not all PC companies mock the ultrabook format in such outrageous fashion. Acer in fact have recently released the Aspire S5 and, even more amazingly, they were willing to let me borrow one. Surely we live in a time of wonder.

The S5 is very light, very light indeed, and it’s also as slim as a supermodel’s dietary options. There’s power under the hood too, not to mention USB 3.0 and even a Thunderbolt port for all those hideously overpriced hard drives that nobody uses. So is it the machine that will finally avert my gaze, and subsequent financial ruin, from the Macbook Air?

There are some quite compelling features in the S5. The aforementioned lack of mass is certainly striking, and a hidden motorised compartment that houses all the USB ports is another. The latter actually made me feel like I was part of a Mission:Impossible style crack squad of computer hackers at times, but that probably has more to do with my worrying personality quirks than any intended design feature. The illusion was also compromised by the terrible noise the compartment made when opening, akin to an asthmatic cylon suffering with a severe bout of constipation. Ah, Tom Cruise will never let me back in the team now.

Mercifully the machine runs Windows 7, which gives it a head-start straight away when compared to my recent Windows 8 experiences (although I should note that I will finally get my hands on a touchscreen enabled laptop next week, so this remark may be quietly withdrawn when no-one is looking).

Two very important reasons. Keyboard and trackpad. To be fair the keyboard on this review model is actually some bizarre European (I’m guessing) version, which also features Z and Y keys that have been swapped around (although they still give the normal letter when pressed, so touch typing became a definite advantage). This means that a standard UK alternative might be a more pleasant experience, but I couldn’t escape the feeling that the keys don’t feel full sized, even though they actually are, which was a little disconcerting. Another issue is that the S5 keyboard also suffers from the unforgivable sin of a split enter key to presumably save space. This seems like a very ill thought out design choice and resulted in the constant miss-hitting of a key that gets a fair bit of use in the normal working day.

The trackpad also became a regular frustration as it detected palm movements randomly, meaning the cursor leapt about just when you didn’t want it to, and the buttons under the pad also lacked any certainty. At times it felt like the machine was waiting for me to utter some kind of secret password that would allow my choices to be registered. Not a game for those in a hurry.

Performance wise the S5 is actually quite impressive, with programs running smoothly and displaying no signs of difficulty while under strain. The display itself though is also a let down. I’ve not been overly impressed with many of the screens on the various ultrabooks I’ve tried, and the S5 just joins the unfortunate pile. Colours are bright but the definition is a little fuzzy, with a frosting appearance on the screen. Not terrible by any means, but it doesn’t draws you in with any great excitement.

It’s not a bad machine, even barring these annoyances, but it’s nothing special. With prices online settling around the £650 mark it certainly offers a fair amount of power and connectivity in an extremely portable form factor for a decent price, but the user experience is definitely lacking polish.

I had high hopes for the S5, as the price and technical specifications seemed very promising, but in the end I soon lost interest in the machine, preferring instead to reach for my cheap and cheerful Chromebook when typing needed to be done.