The young woman I had been controlling for considerable hours, onto whose body I had etched the painful reminder of our time together, was now in a fight for her life. The ground shifted beneath her feet and she was beset by the advancing frames of men who had terrible things on their minds. This…would be interesting.

No, I’m not describing my weekly ’50 Shades of Grey’ re-enactment society meeting. The girl in question is a willing participant who goes by the name of Lara Croft, and the situation takes place in the final moments of the new Tomb Raider game.

Being an old codger I remember when the first Lara appeared. At the time it was unusual to play as a woman character, but strategically placed camera angles that ogled Lara’s various curvy areas helped convince many a young lad that this could have its advantages. The fact that the games were excellent puzzle based adventures didn’t hurt either. Over time though the games grew less interesting, really there’s only so many times you can drag large blocks around dusty caves, and Lara’s once domineering presence diminished and faded into legend. Until now.

The 2013 reboot of the Tomb Raider franchise is a resounding success, transforming the tired format into an action shooter with more brains than many of its contemporaries. There’s also a strong story element that follows Lara’s first adventure in which she leaves behind the innocent, young, history obsessed girl and becomes a homicidal maniac with superhuman upper body strength. Yes, that classic old story.

Apart from the slow paced, quick-time event heavy, first forty minutes the game barrels along with plenty of enemies to fight, flaming arrows to be loosed, and of course the occasional puzzle to solve. Controlling Lara as she leaps from cliffs on to death slides is exciting and nowhere near as frustrating as the older games, which would punish you if you strayed a pixel to the left or right. The combat is hugely satisfying as well, something that was never said about a Tomb Raider game before.

So all in all a tremendous success? Well, yes, but sadly there remains a proverbial fly in the metaphorical ointment. The big boss.

Since the early days of gaming there has been a design convention that determines the finale of any game must involve defeating a larger than life character with apparently only one weakness. The idea is to give the gamer a  sense of overcoming the forces of evil by taking part in a monumental battle, one that shall decide the fate of whichever world they occupy at the time. In reality it means that gamers have to wait for the big monster to attack, then they dodge out of the way, repeatedly shoot /kick/ proclaim harsh accusations at the aggressor’s exposed back, then repeat the process again – usually for several boringly predictable minutes. One additional factor will be the introduction of other, smaller enemies to fight at set junctures, which allows the monster to recover – thus prolonging the agony.

Tomb Raider, after so much fun and challenging gameplay throughout, bows to this convention, leaving the ending bereft of the emotions it deserved. Of course it isn’t alone. Great games such as Bioshock and Batman: Arkham Asylum devolve in similar ways at the crucial moments, but the fact that it’s a newer game with the foreknowledge if these mistakes makes the failure all the more disappointing. 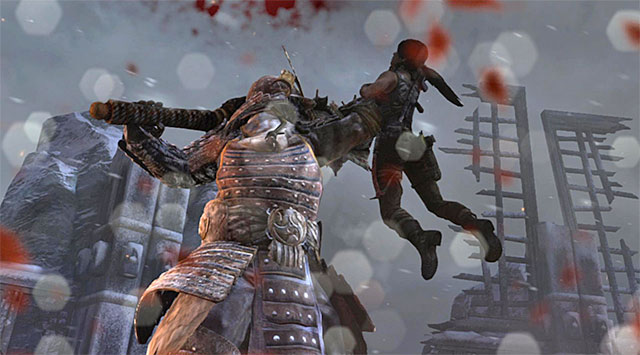 I suppose my main issue with big boss battles is the way they remind you incessantly of the fact that you are playing a game. The previous freedoms you had to plot routes through maps, tackle your enemies with whatever weapons you choose, and explore different ways of interacting with the environment, are all set aside so that you can dodge, fire, run, doge, fire, run, etc. until you pass the requisite, arbitrary point where the monster falls. In most cases you can’t even climb, hide, or make a run for it as the arena has been sealed with invisible doors. Is this really the best that game designers can come up with? Thirty years ago I was doing the exact same thing on my ZX Spectrum…and it was annoying then.

Tomb Raider is a great game, and one that you should play if you enjoy action, storytelling, and hurling yourself off tall buildings. It’s just a shame that the designers are still robbing the dead bodies of games that should have been left to rot in peace many years ago…